David and Tony have known each other for a long time and worked on some projects together in the late 90s. Tony is a former Contributing Editor to i-D Magazine and current contributor to 10 and 10 Men magazines.

When we first met in the early 90s I was aware you made websites. This was a long time ago; when websites were new and considered cutting-edge. I think the dot.com boom changed that. But did you ever work on any of those big or emerging dot.coms?

“I had a big job in 1998-99. It was along the lines of Facebook. It was huge. We had a big suite of offices  in the west end. It was the only big job I ever had but I didn’t like it because the pressure was terrible and most of the other people were keeping it going with drugs. But Reactor was great.”

“Reactor was the company I set up in Shoreditch. It was the only company I worked for that I had any feeling for. I started up Reactor in 1995 and it eventually became ‘[re:]ACT(o.r;). inter|ACT|ive‘. We had a studio in Curtain Road. We were doing web and interactive CD-ROMs. People like Antirom and Tomato were also active in that period. We were doing what was then called ‘multimedia’. But mostly we concentrated on web because it was very interesting and there were not so many people doing it.”

Any particularly interesting projects you recall?

“We did some work for Strongroom studios, then the biggest independent recording studio in Europe. All the studios were decorated by Jamie Reid.  They wanted a website and said ‘Do what you want’. So we designed a split-screen website with lots of panels. Kind of like the Andy Warhol side by side films. They just let us go where we wanted. It was fantastic then. A lot of people wanted to experiment.”

But websites became less experimental. Or at least I think they did.

“The massive change came in 2000.  When Reactor folded in 1998 I went over to this big dot.com project. But at the end of 1999 I left and went to South Africa for a few months, to get a new perspective. When I got back in February 2000 all the adverts on the buses were to do with dot.coms. Everything had changed. Suddenly you saw website addresses everywhere. It got appropriated by big business. But before that it had been quite a wild creative frontier.”

“I discovered the Mac in the 90s about the same time as I was getting my head around using a computer. I’d used computers before but this was with a graphical interface and it came with design programs like the first Photoshop, Illustrator and Quark. You could do your own design on the desktop. You weren’t pasting-up and cutting-up any more. You could do it by computer. And then I went to a Mac show in Earls Court in ’93 or ’94 and there was a presentation in one of the side rooms with Malcolm Garrett who was a big designer then with Assorted Images.”

“He was doing a presentation on how to make a website. There were only a few people in the room. It was mindblowing. I suddenly realised that people all over the world can see what’s on that screen. Up until then if you did a piece of work it was very hard to get people to see it and it was very expensive if you think about print or publicity costs. But suddenly you could sit in your bedroom and make a website and play around and put it online and potentially everybody who had a computer and had net access in the world could see it. It was quite incredible. It felt quite idealistic in the beginning as in ‘This is a force that can be used for good’. You could disseminate information.”

But not all information is good.

“The important thing was that it freed information. The idea of the Internet before the web came along was that all the information was transmitted through nodes so the information was split. One piece went to one place or server in the world. Another piece went to another server somewhere else in the world then they all get joined together again at the destination. The original idea or design was that if there was a nuclear attack and one server got knocked out the information could route around through a network. Which made it, in effect, kind of free. And now with the web, free from Government influence. And I think that’s what people were keying in on. They realised they could publish stuff. Previously there had been things like ‘Sniffin’ Glue’ that were collaged, photocopied and taken out directly onto the street to disseminate information that wouldn’t be controlled. Now it was different.”

You have a very clear picture of this shift.

“The internet was created by Governments to protect data from attack. Now the world wide web meant information could be disseminated and kept free from Government control. I think that was one of the ideas of that time. I’m not sure how many other designers were thinking in those terms. But there were a lot of people in the States  who were thinking about the more political aspects of it.”

Did you see yourself as a ‘designer’ at that point? Your degree was in Fine Art at St Martins?

“When I was at school I was always in the art room. When I went to college I went to art college. That was natural for me. And design has come into it over the years but I see no reason whey there should be any division between art and design.  For example I come from West Cornwall and years ago in St Ives they set up an art society and Barbara Hepworth and Ben Nicholson were big movers and shakers in that group and they decided the work of the society should be split between painters, sculptors and craftsmen. And some of the middle generation of artists like Peter Lanyon were totally opposed to any distinction: they were thinking creativity is creativity.  A lot of my work now is concerned with where creativity comes from. And if you consider where it comes from there can be no divisions. But there is still a tension between fine artists and designers. You are either one or the other. But the young guys now do everything; they create music, they cut and edit video, they do print design, concept design. They don’t think ‘I am this’ or ‘I am that’.”

To get back to your work, the dominant focus of this site appears to be photographs or images of street textures; street-art, posters, torn posters and tags. That seems to make up the bulk of the visual work you are producing. At what point did that kind of work become important to you?

“It’s a common theme throughout the years. When I was at school it was collage. And there are obvious references to collage in street art and what I see on the street. And probably it really started off when I was collecting textures. That was it. I was hooked after that.”

“Beautifully crude chalk drawings. And paintings. I don’t recall seeing any stencil work or sprayed US graffiti stuff. I remember a l lot of what I suppose wasn’t street art in the sense of how we use it now. A lot was home made signs on the wall. There were a lot of clothing factories around and they used to do their own hand-made lettering ‘tradesman use this entrance’ type signs and that style spilled over to walls and around the streets where people were doing drawings. Sometimes chalk drawings or simple drawings.

I know you’ve told me that you started to find other ways of looking at the images you grabbed from the street.

“When I started to take a different magnification on it, putting a different filter on it. And without really knowing what I was doing I wasn’t photographing pieces but photographing the interaction between pieces. It was the edges where they overlapped that interested me. I built up a catalog of this stuff without quite having a focus for it. And I continued to catalog street art because I was fascinated by it.”

A lot of the material was photographed or sourced in Athens?

“I went to Exarcheia in the centre of Athens. Someone told me that if a riot was going to start in Athens its going to start in Exarcheia. Its where the anarchists hang out and the streets are covered with art; street art, political art, activist posters, signs, advertising and DIY lettering that people in the area have added. It is layer upon layer upon layer and also rips – layers are ripped, ripped and ripped off from each other. I was there for a day and became totally mesmerised by the whole thing. In Exarcheia I took a photograph of an anti-fascist poster that showed an image of a burning car form a previous riot and I turned around and saw a burned out car behind me in the street.”

“But I realised that instead of being carried away by the whole vista, I was moving in closer and suddenly seeing a whole new piece of work in just one square foot of space. I was seeing a whole new communication. I was applying a different level of magnification to it and once I had done that, as soon as I stepped back, everything I saw in front of me looked like one continuous communication. I went and had a coffee because I was really excited and thought ‘I need to process this’. And I remembered that in the 90s I had come across Kristeva and her writing on ‘intertextuality’. And what she wrote about the palimpsests of the Medieval Monks; how they would work on an illuminated manuscript and literally scrape one layer off and apply a fresh layer of work. But whatever they put on top is always informed by what is already there – energetically and literally because bits would show through. Which was exactly what was happening in Exarcheia.”

You spent a lot of time watching these walls in Exarcheia?

“I started to watch people and their reaction to the environment. And there reaction was to specific, individual pieces. They would read one poster. Or look at one piece of advertising. And be affected by it. But I don’t think we are aware of the cumulative effect of this never-ending communication, this intertextuality. And I mean literally; you take a poster and its got a certain amount of text and it gets ripped off and another one goes on top and you see bits of the top one and bits of the one underneath. And then someone comes and puts a bit of street art on top of that. And it all mixes in and you get layer upon layer upon layer and its also informed by its own cultural environment. And its informed by whats on the street in its immediate area. Because this is a continuum.”

We will also be talking about the artist Peter Lanyon I know there’s a connection because you are also from Cornwall. And some of his work, even though it dates from the 1950s looks like street art or photographs of street art. At times he uses very bright colors, they look like spray paints. And there are scratches and scrawls on his paintings that are almost ‘tags’.

“And he used to re-use his canvasses. There’s always a bit showing through. And even if it doesn’t show through a layer on top is always informed by a layer underneath and is informed by the layer that is going to go on top of it. But some of his most impressive work are his murals.” 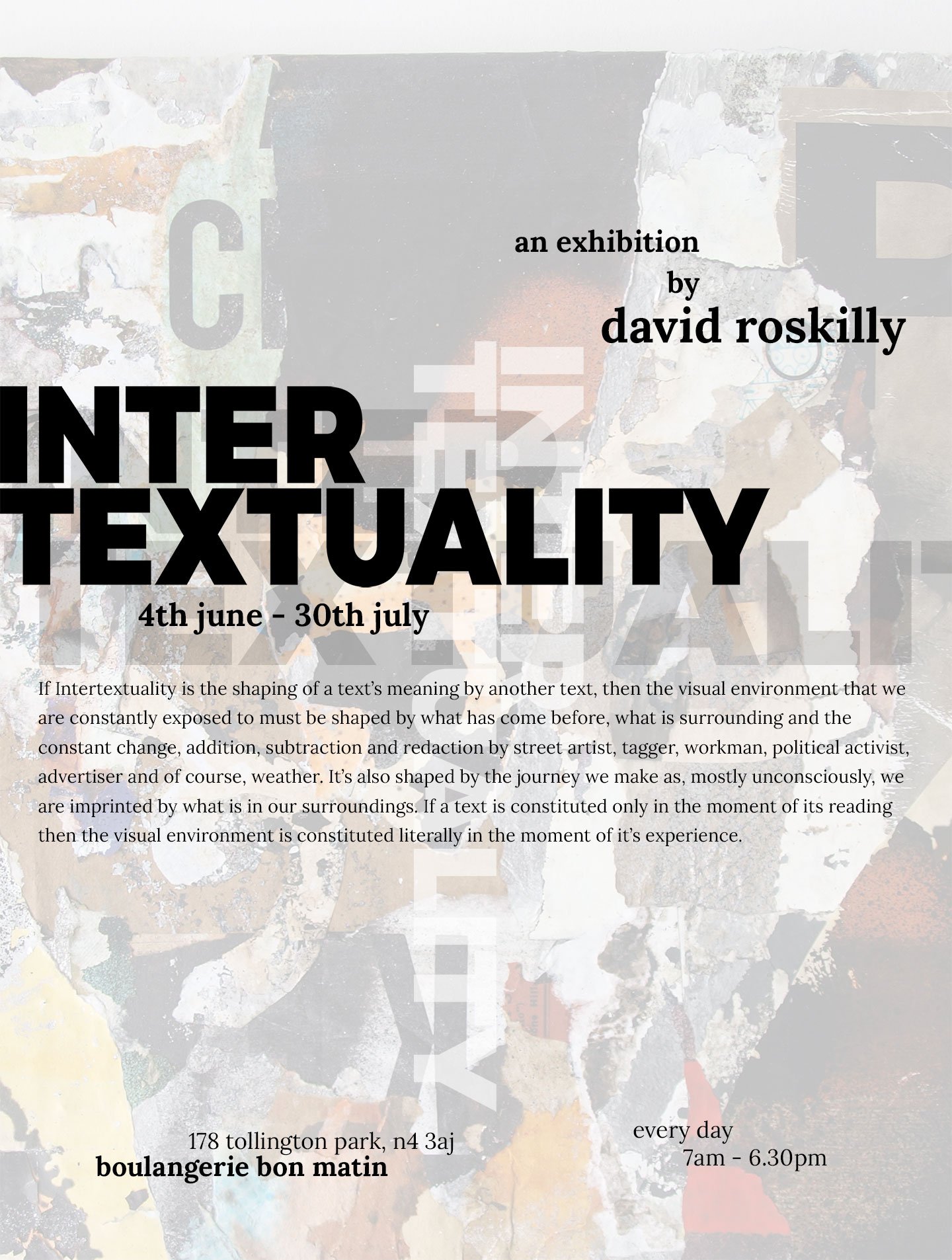 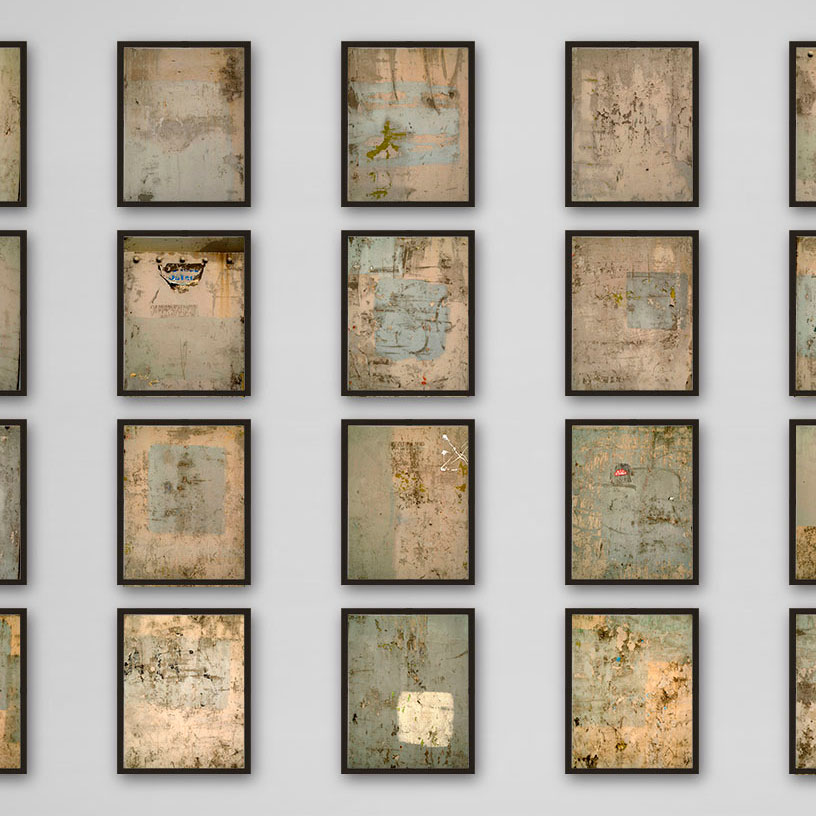 A Bridge in Westbourne Park Deconstructed 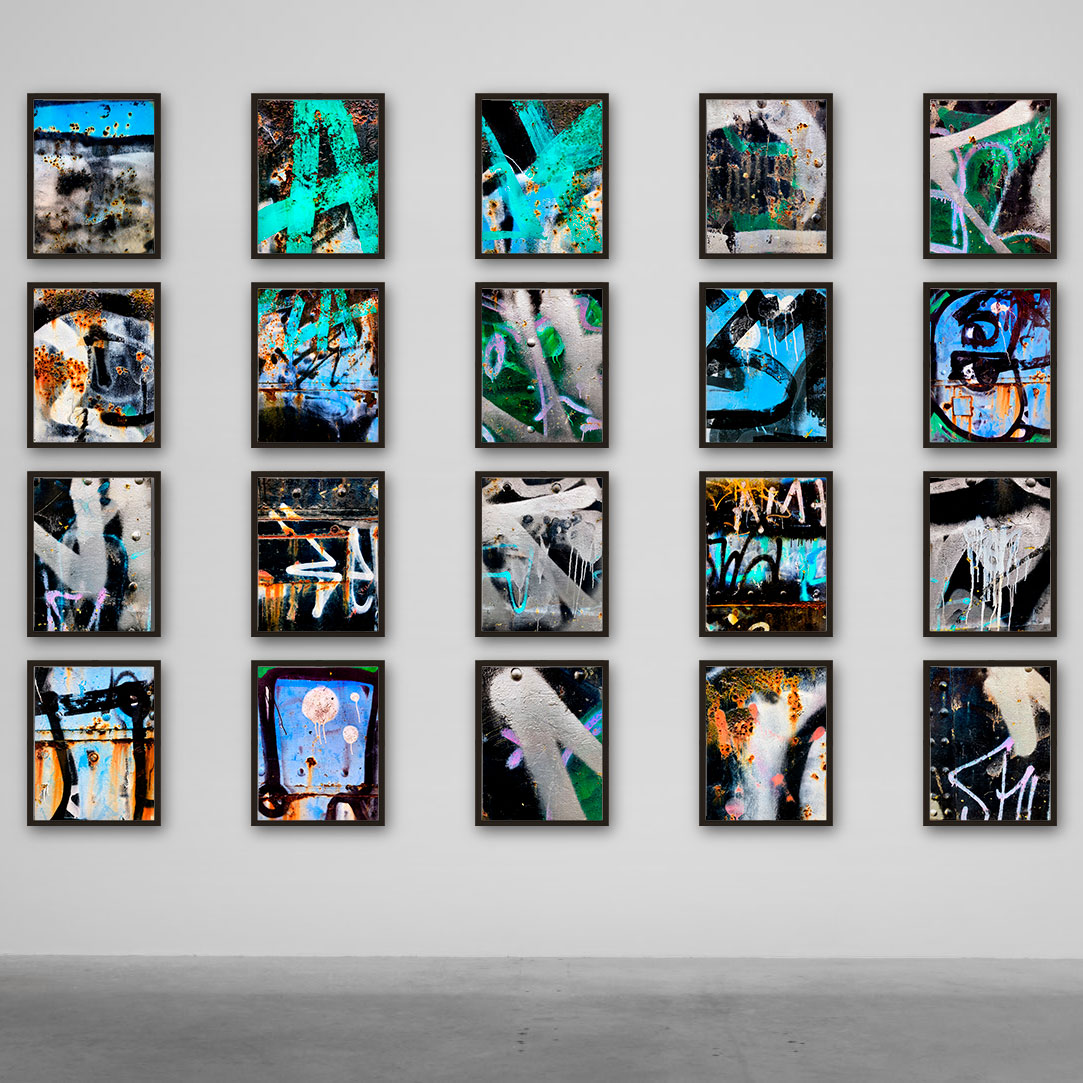